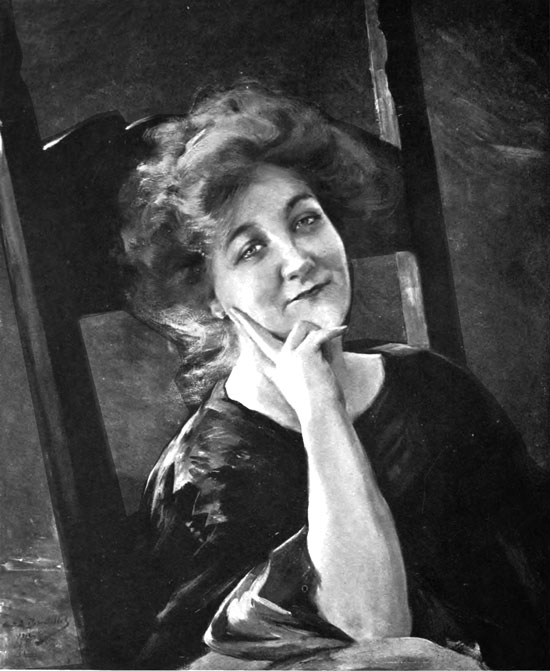 Claire de Pratz was the author of French Dishes for English Tables, to be published by Mount Orleans Press in November 2018. This is the Introduction to the book.

“Swimming, walking, lying in a hammock…”.  Claire de Pratz’s preferred recreations as listed in Who was Who do not really do credit to the intellectual side of her life; but they are a good evocation of her elegantly hedonistic character. She was comfortable in her skin and secure in her independence. Well educated, both femme de lettres and feminist, her life reflected the Anglo-French cultural harmony of the Entente Cordiale and the good living of La Belle Epoque and the Fin de Siècle. Mixing easily in the artistic, literary and political salons of both Paris and London – it was to her that Oscar Wilde addressed his famous wallpaper observation, “One or the other of us has to go” – she wrote prolifically as well as pursuing a career in education and working for the French government.

Claire was born Zoé Clara Solange Cadiot in Hampstead in 1866. Her parents were French. Her father, Emmanuel-Horace Cadiot, was a businessman. Her mother, Philotea Rosin de Pratz, held a professorship in French Literature at Queen’s College in London. Both came from the French provinces, the father from Pillac in the Charente in the south, and the mother from Armentières in the north. They appear to have met in London, because it was in Clerkenwell that their marriage was registered in July 1865, barely six months before Claire’s birth.

In an era when girls were given little education Claire was lucky to receive a good one, starting in London where she attended Queen’s College, founded in 1848 and the first educational institute in the world to award academic qualifications to women. In 1881 her mother died, following which Emmanuel-Horace moved Claire and her two younger brothers, Julien and William, to Paris; it was at the Sorbonne that she continued her studies and from there that she graduated.

In her introduction to France from Within (1912) Claire describes her bilingual upbringing. Her formal English education went hand in hand with a French domestic life. The 1871 census records the family’s live-in cook Ada as being from the Seine. As Claire described, “I never remember any time of my life when I did not possess the two points of view – English and French – simultaneously, being constantly moving from one atmosphere to another”. As she observed, she was both an insider and an outsider.

At around about the time of her graduation from the Sorbonne Claire’s first literary work came out, An Iceland Fisherman (1888), a translation of Pêcheur d’Islande by Pierre Loti which was published under her father’s surname, Clara Cadiot. She wrote an article about Loti for Women’s World (edited by Oscar Wilde), and at this time began a long career as a journalist, writing for the Westminster Gazette, Daily News, Contemporary Review, Athenaeum, Petit Parisien, La Fronde and Revue Bleue. La Fronde was distinguished as being the only magazine of its time entirely managed and written by women.

She also embarked on a career in teaching. She gave adult evening classes before going on to take on professorships in English at the Lycée Racine and the Lycée Lamartine in Paris. In the mid 1890s she was appointed General Inspector of Public Charities for the French Ministry of the Interior.

In the new century Claire embarked on a career as a novelist, writing Eve Norris (1907), Elisabeth Davenay (1909), The Education of Jacqueline (1910) and Pomm’s Daughter (1914). With her non-fiction – French Dishes for English Tables (1908), France from Within (1912) and A Frenchwoman’s Notes on the War (1916) – she was writing almost a book a year. The novels were well received. They are vividly written, strong on characterisation and description though the plots are rather formulaic. Their great interest lies in the fact that they draw on the events of Claire’s own life, and they articulate very eloquently her beliefs and passions.

Her heroines are intelligent, sensitive and independent, but are all a long way from the stereotype of the English blue-stocking of the time; as The Oxford Companion to Edwardian Fiction puts it, “she argues that the English are too mealy-mouthed to recognise the central importance of sex; feminists cannot be expected simply to abstain”. Throughout her writing there is an attack on narrow and restrictive prejudice; in Eve Norris the young heroine fights against her provincial family background, “conventional, prejudiced, with no temperament at all, and weighted with the false narrow morals which are the result of generations of wrongly-applied and misunderstood puritanical principles”. In The Education of Jacqueline the young child is brought up by her mother Francoise, who is widowed before she is thirty and finds herself “totally ignorant of life… Brought up by careful parents in view of a husband who would demand not only an innocent but also an ignorant wife…”.

Claire’s heroines are all capable of great passion – there are passages of richly sensual purple prose, and it is interesting to see that two of the novels were published by Mills & Boon – but ultimately they are independent and confident. In Elisabeth Davenay the eponymous heroine is a young journalist and teacher in Paris, with many eligible admirers whom she finally rejects, wishing to avoid “spiritual bondage”; she leaves France for London where she joins the Suffragette movement. The book created a strong impression, with the Pall Mall Gazette commenting “Elisabeth Davenay is a book that every grown-up girl should read”; more thoughtfully, WT Stead wrote in “The Love Ideals of a Suffragette”
[Elisabeth Davenay’s] interest, and it is a deep and absorbing interest, consists in the fact that more intrepidly than in any other English book that I have read the great question is faced and answered as to the change which the emergence of the soul and intellect of women will effect in the realm of love… The theme is handled with a boldness that never degenerates into coarseness. Although Mlle. de Pratz never flinches, she writes with delicacy that is unsullied by even a passing shadow of the impure. She is a woman handling the greatest of all woman’s questions without any false shame or prudish impurity of thought…

A Frenchwoman’s Notes on the War was the last book Claire wrote. French Dishes for English Tables was republished in New York in 1925 under the title French Home Cooking, with further editions coming out in New York in 1956 and in London in 1958.